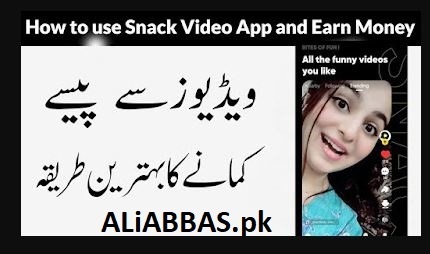 If you are ready to earn money from an online App, then Snack Media App is the best to Make Money Online. Most people used the Snack video app but don’t know How to Earn Money from Snack Video App. Snack video App like Tiktok App where peoples upload their video to get likes and some FAM. But the difference between the two of these best social media apps is that From Snack Video App you can make a lot of money from uploading your Video but not from Tiktok Video Application.

10 Best Websites Where You Can Watch Videos and Earn Money

This article will tell you how to Use Snack Media App to Earn money from it.

How to Earn Money from Snack Video

Millions of Mobile Users Install Snack Video App on their Mobile and making money from it. Like YouTube and TikTok, Watch Videos on Snack Video App, and make money online. Also, invite Your Friends via Invitation Code or Link and when they join via your link, you can earn money online.

Why is Snack Video Giving Money to Its Users?

Tiktok is the Best Competitor of Snackvideo. In the year 2014, Musically was launched in the world Mobile App. After Start, this Mobile app went viral and got Millions of Users at low spam of time. After Sometime, Musically change their name into TIKTOK.

Latterly, after uploading some wrong content on Tiktok, it’s banned in multiple countries. So This was a chance to grow a snack-Video app. Therefore, they are spending millions of Dollars to occupy Social Media Market.