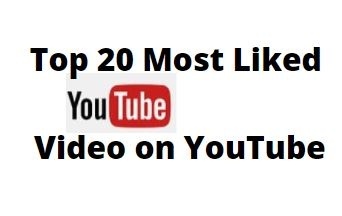 In this article, I will talk about the Most liked Videos on YouTube List-Wise.

This Video was Uploaded on 17th January 2017 by Luis Fonsi. Total likes for DesPacito is 41.50 Million. DesPacito is top of the List of Most Liked Videos in the List. If you don’t know about the Video Language, but you should like DesPacito Video.

Wiz Khalifa uploaded this Video on YouTube. SEE You Again on No.2 on the list of Top Liked YouTube Video. This video was uploaded on 6th April 2020. 31.37 Million likes by See You Again ft. Charlie Puth.

This song was composed in memory of Paul Walker in 2015. Within a year, This Video comes on Top Charts of The Lists.

This Video is on the top 3 at Most YouTube Videos Liked List. on 30th January 2017, This video was uploaded on YouTube Channel. Ed Sheeran is the Uploader of the Shape of your Official Music Video. Total 25.18 Million liked received by this Video.  Ed Sheeran is Top Singer and Running his Own YouTube Channel.

5-Shape of You by Ed Sheeran

This Video Uploaded Date on YouTube is on 30th June 2017. Now He crossed 50 Million Subscribers on YouTube.

This Song Recorded by a South Korean Singer. This Video Was Uploaded on YouTube Channel on 12 April 2019 till this Time, 1.4 Billion View Recorded on Video.

Alan Walked Faded is also in the Top 10 Youtube Liked Videos List. This Video Uploaded by Faded on 3 December 2016 and View until Till today 3.1 Billion and Still Counted that is Amzing.

PSY Gangnam Style was uploaded 9 Years Ago But Loves This Song Today. Till 15 July 2012 to date, 4.2 Billion Views were recorded on video, and in 2021 Million Of Views Are Coming on Day To Day.

This Song was Recorded in Two languages, Japanese and Korean by a Korean girl Group 1 year Ago.

This Video Was Uploaded by An American DJ and Record Producer Marshmello on 2 July 2016. 2.1 billion Peoples Watch This Video on YouTube.